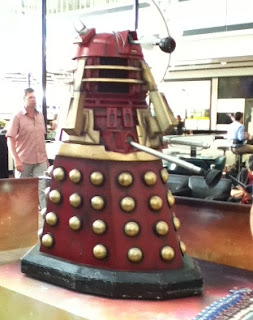 I am now safely ensconced in my hotel room in Fredericksburg, Maryland, ready for the first day of Historicon tomorrow. It's about eight o'clock local time, but my body thinks it is one in the morning, so forgive me if my grammar isn't spot on.

I got up at 5 AM in order to catch a bus, then another bus, to Heathrow. Then just a jaunty little eight hour flight over the ocean, followed by an hour and a half car ride, and I had arrived.

Actually, for all that it was long and included lots of steps, it was mostly painless, just a bit dull. One of the few highlights of the the day was seeing the actual model for the Dalek Supreme, used in the new Doctor Who series, in Heathrow. I'm not exactly sure why it was there, but it was pretty cool. I was quite impressed by the craftsmanship. I fear my only picture taking device is my Ipod, which isn't the greatest. Still, it's better than nothing.
Posted by joe5mc at 16:58