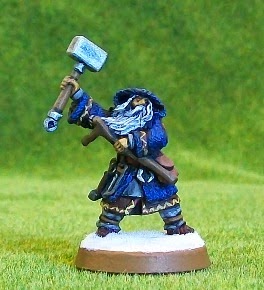 In the last week or so, I've gotten several emails from people who want to start work on their Frostgrave warband before the game is actually released. Well, that is certainly gratifying, and I only hope that the rules live up to their expectations.

While I hope everyone understands that there is only so much I can say about the game before it is published, I do want to help people as much as possible. So, here are some rough guidelines for building a Frostgrave warband.

Wizard: Every warband is led by a wizard. He is the most important, dangerous, and valuable member of the warband. He is basically the player on the tabletop. The wizard has 500gc to spend on assembling the rest of his team.

Apprentice: A starting apprentice costs 200gc. While a wizard doesn't have to have an apprentice, I can't imagine anyone not taking one. It is the only way to get a second spellcaster in the warband, and also allows for more tactical flexibility during the game.

Soldiers: This is a catch-all term for the living, non-magical mercenaries that can be hired by a wizard. I haven't given their stats (which wouldn't mean much without the rules anyway), but I have listed the different options, the cost, and the equipment of each one. A wizard can have up to 8 of these in his warband, and I would suggest that any beginning wizard will want at least 6 (I'd go with the full 8, personally). While the cost gives an idea of the relative value of different soldier types, it is worth noting that price goes up exponentially with quality. A Knight is definitely not worth 5 Thugs. I would not suggest that any starting warband have more than one soldier worth 100gc. You can always upgrade later.

A wizard can hire as many of any type of soldier (up to the maximum 8) that he wants and can afford.

Creatures: Additionally, some wizards will be able to use spells to get a creature or two to join the warband. Some of these will take the place of a soldier, some will be in addition to the normal warband limit. The most common of these are zombies, demons, animated constructs, and animals (wolfs, bears, leopards).

In other news, the rumours going around say that the Frostgrave Nickstarter will be starting up this week sometime! I will, of course, let everyone know!
Posted by joe5mc at 02:48