Paint on a Centaur 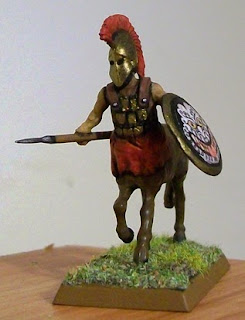 With my wife and daughter away for a couple of days, I managed my first long painting session in quite a while. So, with my headphones on, and a Doctor Who audio adventure in the portable CD player, I tackled the centaur. I decided early on, that since this was the first centaur, I'd go with a very basic paint job. There is lots of potential for painting detail on a horse, but I didn't take any of them. I went with just a few layers of brown, a sort of blondish tail, and left it at that.

My big worry when painting this guy is that the tunic skirt that I used to cover the gap between the horse half and the human half would look silly. In fact, once painted, I think it looks pretty natural. There's a little lump at the back, but otherwise, I think it works out well. I went with red to match the helmet crest and because it will be the unifying colour for most of the army.

Having painted the centaur, I thought I would increase his level of detail by giving him a complex, gorgon design on his shield. I slightly regret this move as I think the shield slightly overpowers the rest of the miniature. Still, it's a minor point, and once this guy is riding in a unit, I don't think it will really matter. 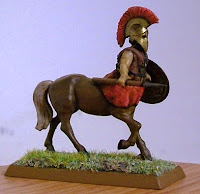 All-and-all, I'm really happy with how this guy turned out. I'm looking forward to converting a few more for the army.

For a long time I wasn't a fan of gorgon shields and avoided using them on my miniatures. Most of them just looked a little too much like a clown face, and I couldn't really understand the connection between those faces and the mythological, snake-headed creatures, of which Medusa is the best known example. 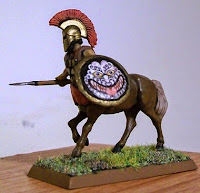 Then, a couple of months ago, I was flipping through a copy of Ancient Warfare Magazine and came across a short article on the history of the gorgon as an armour decoration. This gave me a nice introduction to how the image of the gorgon evolved overtime from the clown faces to the snake headed monstrosity. One point made by the author really struck me. He pointed out that the human gaze is drawn to faces and especially eyes, so having a face painted on a shield might actually give someone a slight combat advantage by distracting his opponent.

So, since reading that article, I've had a bit more respect for the clown-faced gorgon!

While historical ancient warfare isn't really my period, I do heartily recommend Ancient Warfare Magazine. It combines readable articles with some really great artwork.
Posted by joe5mc at 12:00