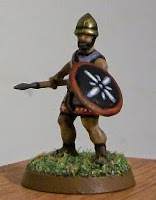 I decided to start painting my Greek Myth army with a Light Infantrymen, because I knew they would be the least fun. Unfortunately, I have to report that painting these figures only confirmed my thoughts about these figures. They really are dreadful. Probably the worst 28mm figures I have ever painted. They have very little detail, and what detail they do have is so shallow that it makes it hard to pick out.

As a miniature painter, I pretty much rely on detail. My style is all about picking out details and then black-lining around them to achieve an overall effect. When there is no detail, my style doesn't work. Instead, out of necessity, I switch to an almost impressionistic style, that mostly consists of wet blending - painting different layers of high-lighting over wet paint. 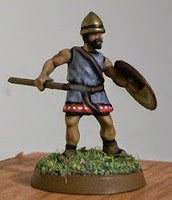 At a couple of points while painting the figure, I honestly thought I would have to give up and throw it away. I just couldn't get it to look like anything. In order to get some kind of detail, I added the red and white trim to his tunic, which I think helps a lot. Originally, I had intended to give these guys plain bronze shields as I didn't have any transfers for their size, and I figured they should look more uniform anyway. However, seeing the figure, I realized it needed any help I could give it.

Oh well, only eleven more of these guys to go...

I spent a couple of hours wandering around, snapping photos and reading captions. Most of that time, I was amongst the red and black vases. Over the last four or five years, I have become a big fan of this art form. Not only do I find it attractive, but it contains so many wonderful, visual representations of Greek Myth and warfare that I find fascinating. On this trip, I was especially focusing on the shield decorations of warriors on the vases.

Most of the ones I saw are reflected in the transfers I bought from Little Big Man Studio; however, one design, that I actually saw a couple of times, was new to me. It was a kind of star pattern. I saw it on one vase on a shield carried by a warrior fighting Herakles and on another on a shield carried by Athena.

I decided to simplify it quite a bit on the shield for my Light Infantryman, but I think it looks pretty good. 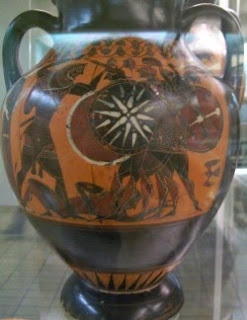