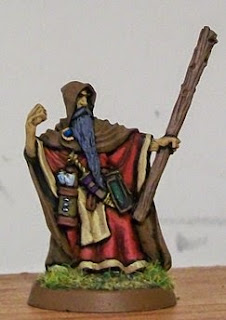 So with the launch of the Frostgrave Nickstarter and the receipt of my own copy of the book, I have been inspired to create a new wizard and chart his journey in the ruins of the Frozen City.

Sancrief is the last member of the Brothers of the Rose, an ancient order of Thamaturges. I decided go with a Thamaturge because I believe they are the most difficult type of wizard to play. Most of their spells are defensive, which can be really useful, but it's tough to win a game of Frostgrave with defense alone. Still, with the proper handling, I think they can be powerful characters.

Since all wizards start the game with the same stat line (although this can change quickly with experience) the main decision the players have to make is what spells to give their wizards. All wizards start with 8 spells. Three of those spells must come from their own school of magic. So, looking over the Thamaturge spells, I started by taking the school's only offensive spell - Blinding Light. While this spell can't actual hurt or kill anyone, it can render them ineffective and vulnerable at least for a time. I then took Shield because wizards are a little short in the armour department. Finally, I selected Dispell, because it is just fun to irritate other players by cancelling out their spells.

With my Thamaturge spells chosen, I then needed to pick one spell from each of the aligned schools of magic, in this case Soothsayer, Sigilist, and Illusionist. These spells would be a bit more difficult to cast, but only -2 on a d20. From the Soothsayer school I took Mindcontrol. I'd need a 14 to cast it, but if it works, I can take control of an enemy soldier. From the Sigilist school I took Explosive Rune, which essentially lets me place landmines on the board. From the Illusionist school, I selected Illusionary Soldier. This spell is actually cast before the game, and if successful, I get to add a 'sort of' soldier to my warband. 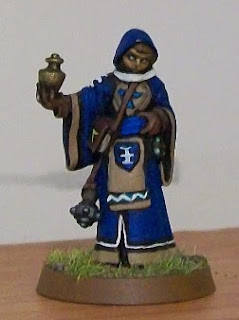 My last two spells had to come from any of the five schools of magic that are neutral to Thamaturges. I'd be at -4 on these, so it was better to look for ones that are generally easy to cast. So, I took Fog from the Witch school, which is good for blocking line of sight and Telekinesis from the Enchanter school, which allows me to move treasure about.

So, with my 8 spells selected, my only other decision for Sancrief is what kind of weapon to arm him with. A wizard can have either a staff or a hand weapon for free, anything else he has to buy with his starting gold. Since my miniature is equipped with a staff, I decided to stay with that.

With Sancrief ready to roll, he needed to round up a warband to accompany him into the ruins. So, using his 500gc, he started by hiring Vorana as his apprentice for 200gc. An apprentice knows all of the same spells as her wizard, but has a tougher time casting them. They can be equipped with any weapon in the same way as the wizard. The miniature has a mace, so I decided to go with the free hand weapon.

Sancrief is ready to enter the ruins! (Hopefully I'll have a report of his first adventure up in the next day or so).

The figures for Sancrief and Vorana are both from Reaper Miniatures. The warband will be made up of figures from a variety of manufacturers...I'm kind of holding out for the new plastics!
Posted by joe5mc at 12:17