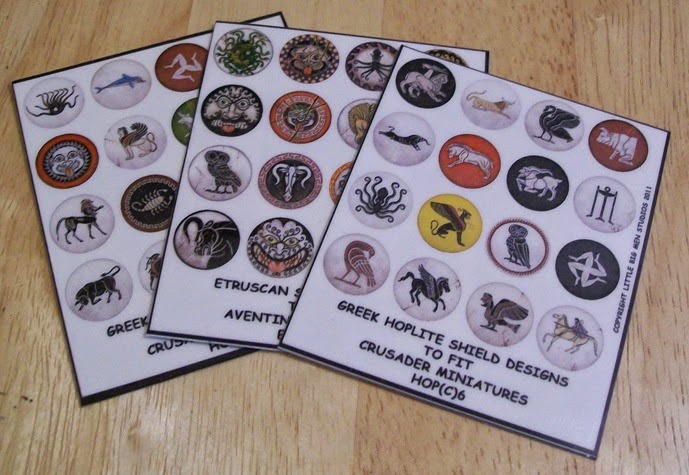 Last night,  I managed the boring and not really visually-appealing task of preparing the bases on my first five Greek Myth figures. This involves using bits of label to cover up any exposed parts of the slot and then plastering over the base to give it a more level surface.

I used to hate decals. When I was younger, I used to make plastic military models and the water-slide transfers that come with many models caused me no end of grief. First, they escape in the water and go floating around. Then, when you do catch them and try and put them on, they slide all over the place. When you finally get them where you want them, you always have to touch them one more time to get rid of excess water, and inevitably they either slide out of position, or, even better, tear in half. If by some miracle you do get them on, six months later, they shrivel and peal off.

Thus, for many years, I avoided having anything to do with decals in wargaming. Then I discovered Little Bag Man Studios. These are THE guys when it comes to miniature shield decals. A few years ago, I took a chance and tested them out on some Viking minis. They just looked so good, I had to give them a shot. They are wonderful.  Unlike water-slide transfers, these are more like stickers. You cut them out, peal off a thin bit of plastic on top, then place them face down on the shield. When it's attached you just wet the paper that is still attached to the back and the paper lifts right up, leaving your beautiful shield decoration. These little decals can really make a model.

So, when I started this new Greek Myth project, I immediately put in an order, and it arrived today. I got three sheets (at £3 a sheet) each has 16 decals. They are technically for Crusader miniatures as they don't make them specifically for Wargames Factory figures, but they are close enough. Two of them are Greek, one is Etruscan, but as long as they look cool, that's good enough for me. There are lots of really cool images on these, including a lot of mythological creatures: the Hydra, the Chimera, Pegasus, the Kraken...there is even one of the Etruscan ones that appears to have the Batman villain, the Joker, on it!

Can't wait to get these suckers on some shields!
Posted by joe5mc at 00:54