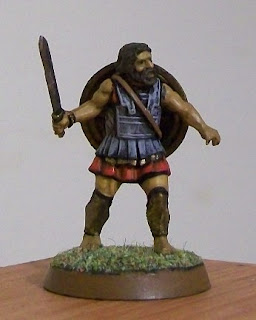 Since my last post, I had a bit of a painting-breakdown. I was working on a second Numidian and my first Hoplite and neither seemed to be working. The more I tried to make them work, the more frustrated I grew, until I almost ruined my evening and nearly decided to throw the whole project in the bin. Of course, I was over-reacting. This is supposed to be a fun hobby, a way to relax.

Anyway, heeding some good advice, I put the project aside, and spent the next couple of days devoting my hobby time to clipping sprues (amazing how little space a 'box of miniatures' takes up when you clip all the parts off the sprues). I returned to my Greek Myth army yesterday, and picked up my brush with renewed enthusiasm. I finished off the second Numidian. I had been struggling with his shield design, so I ended up giving him the same design as the first one. It made life easier and gives them a nice unified look. I also finished the first of my heroic hoplites.

Originally, I had intended to give my hoplites black armour, like Jason and the Argonauts in the classic film, but I just couldn't get it to look good. So, instead, I painted grey over the black and I'm very happy with the results. I had also been struggling with how to position the shield on the hoplite's arm. I couldn't find a position that looked natural, so I stuck it on his back instead. Obviously, he's been caught of guard, and only had time to draw his sword. Okay, that doesn't make much sense in the context of a pitched battle, but hey, the figure looks good, so who cares. I'm really pleased with how well the Gripping Beast head looks on the Wargames Factory body. 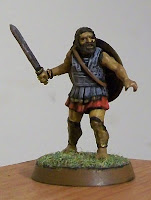 Despite the break in my painting, I carried on with my reading, finishing books 4 through 8 of the Odyssey. In book 4, we finally meet Odysseus for the first time, trapped on the island of Calypso. When he finally gets permission to leave, he quickly builds a raft. Well, I say quickly, it takes him four days, but that seems pretty quick to me. If I were trapped on an island, I could probably spend years attempting to build a raft before I got anything seaworthy. Odysseus, however, is not only a hero, but he also comes from a small island nation, so I suppose he probably knew a thing or two about ship building (then again, he was king, one wonders how much hands-on ship-building he did).

The raft lasted 18 days at sea, unfortunately the gods decreed it would take him 20 to reach land. After two days in the water, he eventually washes up on a friendly shore. The next three books are all about the greeting he receives, the meals that are eaten, the songs that are sung, and the games that are played. Interesting stuff, but it might drag a bit in a modern movie version. 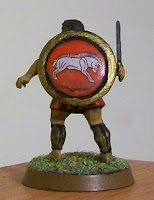 Next book, it appears that Odysseus will final start talking about his epic journey from the victory at Troy. While I'm sure it has been remarked upon many times before, it is very interesting how the tale of the Odyssey is crafted. It actually starts very near the end of the story, with Odysseus almost home, and the problem of the suitors reaching a crisis in his house. It then goes back and tells of the adventures leading up to this point. Normally, I'd say this is a very modern style of narrative, but obviously it's not.

Anyway, next time I hope to have my first painted Centaur to show off.
Posted by joe5mc at 13:52