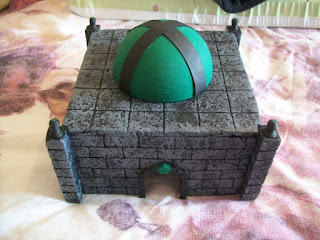 Originally this post was going to be entitled ‘Home’, but, in truth, I don’t feel like I have a permanent home at the moment. We have sold our house in Oxford (all done and dusted, yeah!), but are still waiting to exchange on our new house. Indications are that it could be awhile. Still, things could be much worse. We have temporarily moved in with my in-laws. They have a large house, so the kids have one bedroom and us adults have another. Our room is big enough that I can put a desk by the window to work. From the window I can actually see a tiny glimpse of the English Channel, and, amusingly, the house we are trying to buy. Still, even if this isn’t ‘home’ exactly, I’m glad to be back.

Not that I didn’t absolutely love GenCon! It was a fantastic show. I got to meet all kinds of interesting people; spoke to a lot of fans about Frostgrave and Ghost Archipelago; ran some demos, and even got a little time to wander around and have a look at some other parts of the show. It’s definitely a place I could go and game and have fun for 4 days! 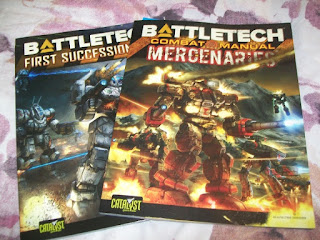 One of the highlights of the show was playing a game of Frostgrave with Jim from the GeekDad blog and two of his friends who had never played the game before. (In fact, I’m not sure they had ever played a wargame before). It was a terrific game with lots of drama, on some fantastic terrain, but I’ll hold off saying too much about it until after Jim has put up his battle report.

The really cool part was that Jim gave me the mausoleum he had built for the game as a keepsake. Not only is it a great piece of terrain, but it’s got some little green lights in it to give it that extra ‘spook’ factor! Jim actually did a video on building it which you can watch here.

I also managed to do a little bit of shopping, although I was very constrained by my small luggage. I picked up a couple of the new BattleTech books. They are mostly fluff books, which is perfect for me since I play about one game a decade. I find the BattleTech line difficult to keep up with as news is often hard to come by – also the books can be hard to obtain the UK, so I figured I’d better grab them while I had the chance.

In their display cabinet they were showing off some of the new plastic mechs that will be part of the new starter kit coming out…someday. Traditionally, I have not been a huge fan of their mech designs, but these new ones look great, and I’ll be picking up the new box if I can.

My other purchase was a pair of small figures cases from Chessex. At $12.95 each these hard plastic cases are a real steal. Fourteen pockets make them ideal for carrying a Frostgrave or Ghost Archipelago warband with a couple extra spaces for treasure tokens and dice. Oh, I also bought a new d20 which caused some real damage in the Frostgrave game!

Well, now back to work. Actually, I suppose GenCon was work, but it was so much fun, it didn’t really feel like it.
Posted by joe5mc at 06:14