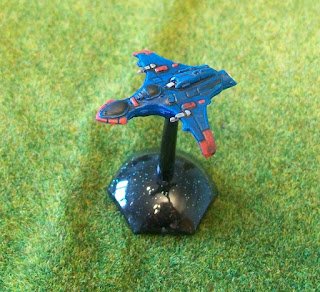 Yesterday, I mentioned that my new mech was part of my ‘Firehawks Legion’. I am using the term ‘legion’ under its definition as a combined-arms military unit. In the future I hope to add tanks, infantry, etc. For the moment though, I am concentrating on aerospace support.

The fighter is a ‘Salamander’ miniature that was originally manufactured for Silent Death: The Next Millennium, a space-fighter game from the 80s/90s. I am a huge fan of this game, which I think has really stood the test of time, and plan to use my work on the Firehawks as the basis for painting up a bunch of fighters to play the game. I’ve even ordered a new outer space hex map from Cigar Box Battles!

For those interested, the fighter is part of a set of twelve plastic minis that can still be obtained from EM-4 in the UK (although they are listed as out of stock at the moment) and Metal Express in the USA. It’s probably the best deal in space fighter minis around!

I painted this guy up in the blue and red of the Firehawks. Nothing fancy, just slap some paint on, give it a wash, a bit of dry brushing, and there you go. Easy and effective!

Well, I say easy – this guy actually had a wing-man, but he didn’t survive the painting process...

Foolishly, I painted the figure while not on its flight stand, and got enough paint in the hole that it would no longer fit. In order to clean out the hole, I got my dremel tool and, in a fit of over-enthusiasm, managed to drill straight through the figure. I probably could have salvaged it, but decided it probably wasn’t worth the effort, considering I’ve got at least three more of them.

When you are piloting a mech, it is good to know you’ve got support in the skies above! 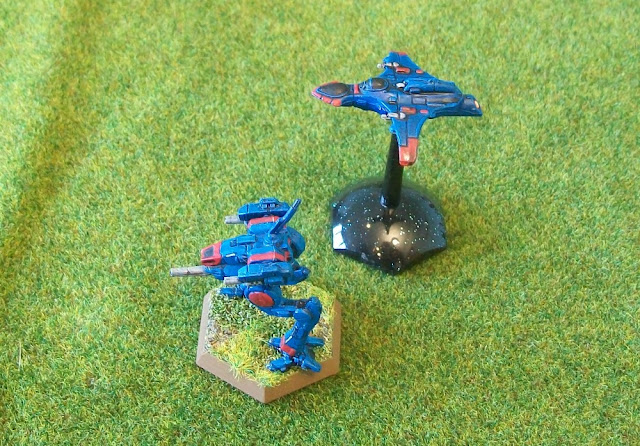