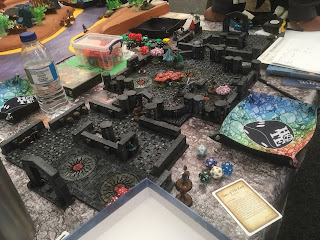 I want to say a big Thank You to the guys from the Hackney Area Tabletop Enthusiasts who came out to Tabletop Gaming Live this weekend and ran demonstration games of Frostgrave and Ghost Archipelago for anyone who was interested. They had a small, dungeon set-up for Frostgrave, and then a bigger (and significantly more colourful!) table for Ghost Archipelago. I’ve chatted with some of them before, when they’ve run demos at Dragonmeet, but it was great to have a chance to really hang out, talk about games and gaming, and meet a bunch of new people. I even signed a few books.

I am seriously lucky (and grateful) to have people like this playing my game and encouraging others to play it as well.

One of the highlights of the weekend was having a chance to play a quick game of Ghost Archipelago with Gary and Maciek. To speed things along, we only played with half-sized warbands. The good news was that I had brought along my newly painted Ghost Archipelago crew for just such an eventuality. The bad news was that Maciek had brought along his horde of newly painted giant spiders… 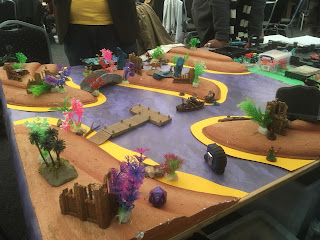 The game opened with Cassandra, her Warden, a scout, and a couple of crewmen jumping in a boat and rowing over to ‘spider island’. Boldly, Cassandra jumped out of the boat and promptly lost a fight to giant spider, took one point of damage, and was poisoned. She had to be rescued by a crewman. So actually, I had a stronger opening than Gary, who quickly lost his Heritor to a giant snake. Things picked up from there. My scout shot down a couple of spiders, and a crewman took out another. Cassandra eventually killed one on her own.

Due to the heavy population of snakes and spiders, actual crew-on-crew action was minimal. I did manage to cast warp weapon on Maciek’s Warden and destroy his sword. This led to one of the best moments in the game, when his Warden, now unarmed, punched a goliath scorpion in the face, before jumping in a boat to make his get-away. Meanwhile, Gary’s Warden washed away one of my crewman with a well-placed Wrath of the Waves.

Eventually, I managed to secure two treasures. Gary had one, while Maciek had one in the bag, with another being carried by a lowly crewman. The crewman had two choices – face the goliath scorpion or jump into the water and try to swim. He opted for later, jumped into the water and promptly drowned as Maciek rolled a 1 for his swimming roll…  Victory by default!

Now, one may question whether I should count experienced points earned in this very casual pick-up game, but I talked to the designer and he said it was okay. So, Cassandra gained 130xp, while Sliss the Warden got 100xp. I also rolled for treasure and came up with 20gc, a Gemstone of Casting (nice) and a dose of stinkwort.

Anyway, once again, thanks to all of the members of the HATE club that came out over the weekend, and an special thanks to Sasha for organizing it! I hope you all enjoyed it as much as I did.