I’m in a Dungeons and Dragons book! 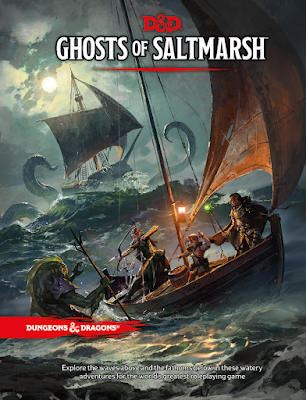 I don’t suppose that anyone outside of the world of publishing looks at imprint pages – those pages at the front of a book filled with tiny text, seemingly random numbers, and copyright notices. However, a careful examination of the imprint page in the newly released Ghosts of Saltmarsh book for Dungeons and Dragons will reveal my name, listed as a ‘Designer’.

Check off a big item on the Renaissance Troll Bucket List!

Now, in truth, my contribution to this book was pretty minimal. In fact, none of the actual words in the book are mine. My contribution comes from another project, which apparently had a significant influence on this one. Personally, I’m not sure it is enough to warrant a design credit, but who am I to argue with the experts?

This isn’t the first credit I’ve received in a role-playing game. My first came when I was just fourteen (with a huge assist from my mother) in the The Grey Mountains book for Middle-earth Role-playing. Over a decade later, I got my second credit, writing most of Rise Alabama! for Savage Worlds. In retrospect, I think both of these were an extremely important steps on my road to being both a writer and game designer. However, both of those are long time ago… so long ago they almost seem to have been written by a different person.

While most of my time these days is taken up working on my own games, in my own worlds, it is wonderful to have left a little mark on the huge legacy that is Dungeons and Dragons.