Mutiny on the Spanish Main by Angus Konstam 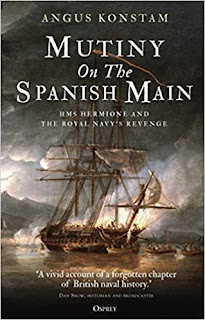 Nothing helps me through the anxious times quite like a good book! For awhile I can put all the worries aside and travel to another world, whether that be fantasy, science-fiction, philosophy, or history. A couple of days ago, I picked up Mutiny on the Spanish Main by Angus Konstam and read through it in a fury of excitement.

Straight up – this is a great book.

It tells the story of the HMS Hermione, a Royal Navy frigate whose crew mutinied in 1797 and turned the ship over to the Spanish. It is a dramatic and bloody tale, full of intriguing characters. In fact, there is so much more to the story than the mutiny itself. There is the Royal Navy’s pursuit of the mutineers, the politics between Britain and Spain, the numerous trials of captured mutineers, and the legal wrangling between Britain and the United States. To top it off, there is the incredible cutting-out operation launched by the British to recapture the ship. I know it’s all history, but really, I don’t want to give too much away!

What is perhaps most incredible is that this tale can be told so coherently and so completely. Many of the central characters don’t survive, and the stories of those that do are scattered about both geographically and chronologically. Angus Konstam has obviously done his research (the notes and bibliography are extensive), but I just read it as a story and thoroughly enjoyed it.

If you are fan of Nelsonian naval history, military history, or bloody tales of the sea, you will want to add this one to the bookshelf.  Highly Recommended.

[Disclaimer – Until recently I worked for the publisher, Osprey Publishing, though it’s been a long time since I had anything to do with the military history side. I have met Angus Konstam on several occasions and many years ago would send Osprey books as prize support to his local wargaming convention!]