Random Musings On My Games 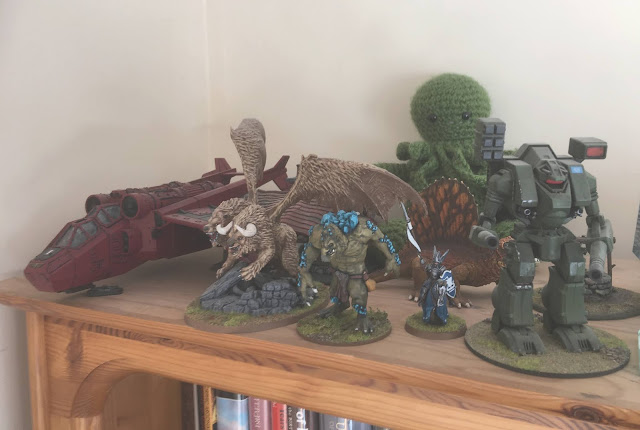 Some random musings about my games - accompanied by an even more random photo of the stuff on one half of the top of my office bookcase!

Stargrave - I meant to write a blog this week about the different backgrounds you could give to your captain and first-mate, but I didn't get around to it. Here's the list that appears in the rulebook: Biomorph, Cyborg, Mystic, Robotics Expert, Rogue, Psionicist, Tekker, and Veteran. Each one of these comes with specific stat boosts and a list of 'core powers'.  Captains and first-mates can, but are not required, to have the same backgrounds. I'm planning on creating new backgrounds in the supplements.

Rangers of Shadow Deep - I finished my first draft of Dungeons Dark this week. Despite only having 4.5 scenarios, it's the longest supplement I've written because each of the scenarios is broken down into numerous rooms and there are loads of notes! Still a long way to go, but it's getting there. North Star showed off a picture of their forthcoming humpback miniature. Gonna need a couple of those guys in Dungeons Dark!

Frostgrave, 2nd Ed. - I'm really annoyed that I didn't change the rules for 'Badly Wounded' when I had the chance. This is the last instance where a warband can play a 'man down' because of the rules. If I were writing it now, I would allow the player to either play with the wounded figure, but start them at -6 Health, or replace the figure for the game with a free thug or thief.

Also, I just noticed the game is sporting a 5-star average on Amazon with over 250 ratings! That's pretty cool.

Ghost Archipelago - If I had to pick one of my games to play with someone else right now, it would be this one. Partly because I've got my new crew that has never been used against an opponent, partly because I miss it's colourful setting. There is a cool solo scenario coming for it in the next volume of Blaster - basically the crews end up in Innsmouth...

Oathmark - I wish I had included 'Expendable' as an attribute. When a unit with this attribute breaks, it would only cause Cascading Panic among other units with the Expendable attribute. It would make sense for units like goblins slaves, warhounds, wolves, etc.

That's all for today!