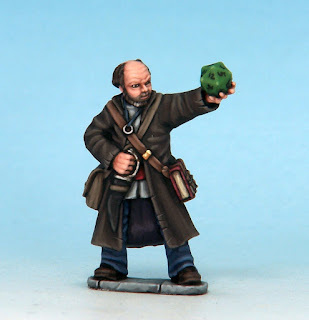 Last week I received the most incredible (little) gift. It’s me, in 28mm, which actually means the figure is closer to 26mm!

This incredible piece was a gift from my long-time friend, colleague, and collaborator, Phil Smith to mark my departure from Osprey Publishing. Phil and I go back some 14 years. He joined about 6 months after I did, and we were immediately put together to work on reprints – him for editorial, me for production. I soon left production for marketing, but we continued to work together, especially as we both worked to grow wargaming within the company. Later, when I created the Osprey Adventures line, Phil helped me at every step as I essentially took on the work of an editor. We even wrote two Osprey Adventures books together: Steam Punk Soldiers and Steampunk Soldiers: The American Frontier. After that, I would officially rejoin Phil when I became the Marketing Manager for Osprey Games, working under Phil. I left the Osprey office over three years ago, but Phil and I have remained in constant communication, helping one another with whatever we were working on – and constantly emailing back and forth about miniatures! He was the first friend I made in Oxford and has been a source of constant support in the second (or British) half of my life. 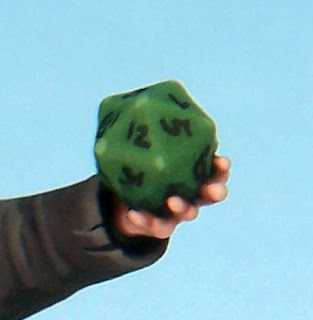 Despite that, sneaky Phil managed to get this figure made without me having the first clue. The figure is sculpted by Bobby Jackson, who has done all of the Rangers of Shadow Deep figures and most of the recent Frostgrave ones. And, at Phil’s direction, he included some wonderful little details. Most noticeably, the big d20 in my hand. (Hey, I have written games that use d10s!). I’m wearing the One Ring around my neck. I’ve got a book by my side that has ‘Rules’ written in runes on the cover. And my bag is held shut by one of the Leaves of Lorien!

I fear he also captured the true state of my hair and the general bagginess of my trousers!

From Bobby, the files were sent to Nick Eyre over at North Star who handled turning it into a figure and having the mold made. The first casts were then sent to Kev Dallimore, who painted the figure that was sent to me (as well as taking the photos seen here). I’ve said it before, but I’ll say it again – if you haven’t seen a Kev figure live, then it’s hard to fully appreciate his artistry. But, if you are looking for a ‘wow’, check out the close-up on the die! Yup, he put the numbers on the die. When looking at the actual figure, I can’t even make out specific numbers – with my reading glasses on! That’s how small they are! 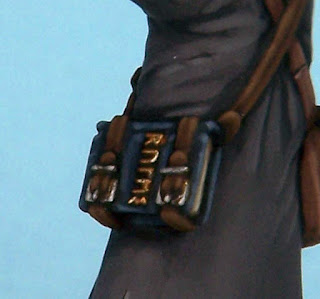 So – thanks to Bobby, Kev, and Nick. And especially thanks to Phil Smith. This is such an incredible little gift that I will treasure always. I feel like I need to buy a display case just for it.

No, I don’t know when, or even if, this figure will ever be available. I mean, I’m not sure how much appeal it has beyond myself. 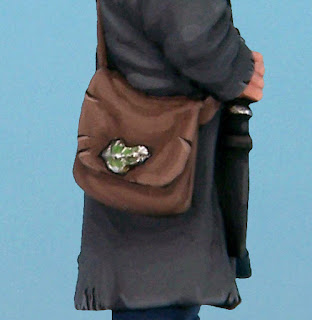