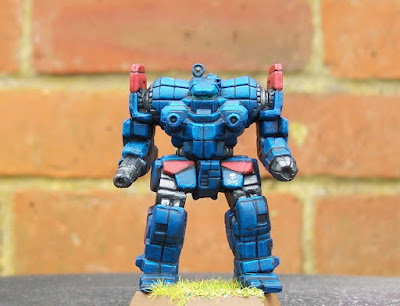 That’s not me being self-congratulatory about my painting skills, that’s actually the name of this specific battlemech. It’s an ‘Awesome’.

That said, before starting on this guy, I decided that I had been getting a bit lazy about my mech paining, just trying to finish them as fast as possible, and not really enjoying the process. So, when I started painting this guy, my goal was to see if I could ‘up my game’ and really paint him to the best of my ability. In practical terms, this meant painting a lot of little black lines.

I kept the same blue, red-detail, colour scheme that I have been using on my Firehawks Legion, but this time I went with several layers of both colours and relied less on black washes. I also left a few parts of the mech ‘unarmoured’, but which I mean I painted them metallic. 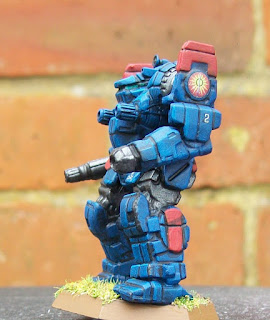 Finally, utilizing my new-found love of decals, I applied several. First and foremost I gave him a big Federated Suns insignia. This mech actually comes with a perfect circular area to apply it, and even allowed me to use one of the bigger decals I’ve got. There is a corresponding spot on the other side of the mech, but I have left it empty for the moment, as I’m hoping to get some ‘Firehawks’ decals to apply later.

I gave him a little skull and crossbones (from Robotech) decal on his thigh because…well, it is a death machine after all. Finally, I added a couple of random numbers because military machinery often seems covered in numbers that have no meaning to the layman.

Final verdict – I’m so pleased with this guy I’m thinking I might have to strip down some of the earlier ones I’ve painted and give them another go. For the moment, I think I’ve got a new commander for my Legion.
Posted by joe5mc at 05:17