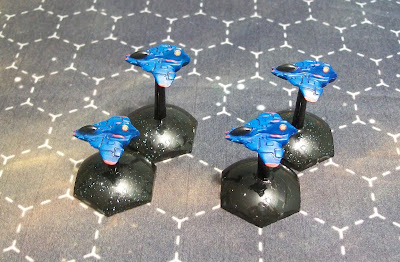 This year, in my gaming life, I would like to return to some of the classic games that inspired me, and additionally, actually make use of some of the books and games on my shelf. To start that project, I plan to play some Battletech, and, one of my all-time favourite games, Silent Death, a space-fighter game.

I’ll talk more about the game later, for now I just wanted to get some paint on a few minis so I could play with decent look ships. I started out with these four Pit Vipers. If you are in the UK, you can get these guys as part of a pack of fighters from EM-4. They are just about the smallest fighter in the game. Super fast and with decent shields, but very weak offensively and brittle.

I decided that I would try and paint my Silent Death and Battletech miniatures in similar colours so that I could use them all as part of one force if I wanted to. So, these pit vipers are painted in the same colour as my Firehawks Legion mechs. I even went so far as to add little decals of the Federated Suns (one of the major players in the Battletech universe.)

As opposed to some of the earlier mechs and fighters I painted, I went lighter on the washes this time, and I think it has paid off, with a subtler, nicer looking shading.

Now I just need someone for these guys to shoot at!
Posted by joe5mc at 05:24