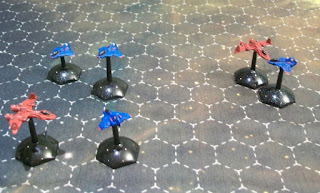 Having painted up all of the little ships required to play the first introductory scenario in the original Silent Death box set, I decided I would give it ago. So, breaking out my new Cigar Box Battles space hex mat, I set them up and got ready to fly.

The first thing I noticed is that the scenario didn’t use torpedoes. While this makes sense for a starter game, it’s a bit of a shame as torpedo usage is one of the real tactical nuances of the game. Oh well, I’m just getting back into it.

On one side we had 4 little Pit Vipers. Super-fast, decent armour, puny weapons. On the other side, a pair of Thunderbirds. Fast, but low-armoured. Decent armament, but lacking the torpedoes which often make them a great choice in points matches. Before playing, I figured the Thunderbirds held the advantage.

The game started with the initiative roll, which was won by the Thunderbirds. If I had to pick one weakness of the game, it would be initiative. Basically, someone has to move first, and that poor fighter then becomes the primary target for the turn. It’s an issue also seen in Battletech. Actually, it is an issue that was brilliantly solved in X-Wing with its innovative movement system.

So, turn one saw a Pit Viper take a heavy hit, stripping it of shields and leaving it limping along. It was destroyed the next turn, while a Thunderbird took minor damage. However, then things went sour for the Thunderbirds. On turn three a Pit Viper got a lucky shot that destroyed the weapon on one T-bird. The T-bird was destroyed a moment later. After that, the remaining T-bird lost the initiative in three straight turns and was brutally hunted down and destroyed by the remaining Pit Vipers. 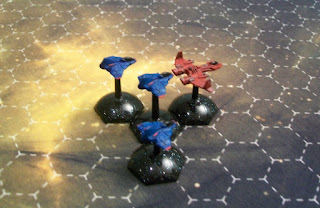 The whole game took about 15 or 20 minutes. And that is the great strength of Silent Death. It is very, very fast. Obviously if you add in more ships it slows down, and the use of torpedoes also slows it down a bit as ships tend to split up ttempting to dodge the torps. Regardless, even big games of Silent Death play out as fast as any wargame I can think of.

Despite not having played a game of Silent Death in twenty years, I remembered the rules almost perfectly, only having to check the book once. Looking at the next scenario, it is nearly identical, just using different fighters in another 2 on 4 match up. So, I think I’m going to skip the rest of the introduction and go straight to the main scenarios to get something a bit more meaty. First, I’ll need to paint up some more ships! 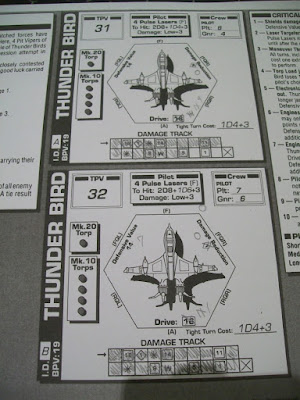