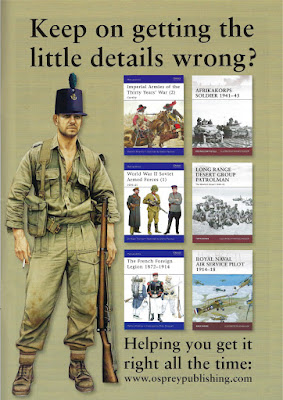 Over the last couple of months I have bought some old issues of Battlegames magazine and have been reading through them as part of my Imagi-Nations project. This magazine, which ran for 30 (?) or so issues about ten years ago, served as my main introduction to the concept, and it remained a constant theme throughout its run. The editor, Henry Hyde, continues to share his enthusiasm for wargaming at his Patreon and through his writing. I'm looking forward to his upcoming book on Wargaming Campaigns. You can still get most issues of the magazine digitally at the link above.

Anyway, I was flipping through one issue, when I came across this advert. It not only made me smile, but it brought some memories crashing back. I was the junior member of the Osprey marketing team at the time - mostly handling review copies, customer enquires, and the like. This advert was the brain-child of Mike R., and I can still remember him sitting with the designer, Julian K., as they carefully cut the shako off a Napoleonic soldier and stuck it onto the Vietnam War soldier (digitally, of course!). It took a lot of time to get it to fit that well!

Some years later, I would also use the artwork of the Vietnam soldier as part of a gigantic poster we made for our stand at a big Family History show. The soldier was part of a timeline showing how far back in your family tree you would probably have to go to get to soldiers from different eras. I remember that we used this particular piece of artwork because there was a big debate in the office over whether or not we should edit out the cigarette! I'm not sure why this became a 'hot topic', but somehow it did. Personally, I had no problem with it as the cigarette was being presented in its 'historical context', but I didn't feel strongly about the issue. I think, in the end, we took the cigarette out. The show turned out to be a complete bust anyway. I think we spent more money printing the posters than we made at the show...

Note 1 - Osprey had a complete set of Battlegames in their purpose printed folders. I miss that set!