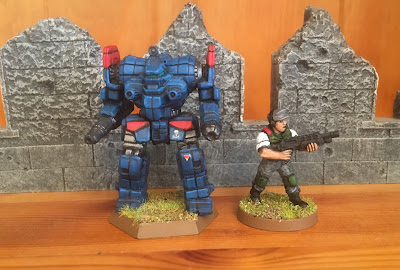 It’s now three months until the official release date for Stargrave, which means the book is probably printing somewhere. I honestly don’t know where, as Bloomsbury, the parent company for Osprey Games, uses printers all over the world. Normally, I would be expecting to get an advance copy in the next month or so, but due to Covid, I will likely only see the book a month or so before release.


I know a lot of people are excited to get started on their crews, so I thought I would share a little more information to get people thinking about figures. Specifically, I thought I’d discuss species and robots!

The game divides species into two-broad groups: humanoid and non-humanoid. All crew are assumed to be humanoid, but beyond that, the rules don’t care at all what they look like. They can be tall or short, hairy or scaly, have ten eyes or one. So really, 90% of the ‘aliens’ that have appeared in various science-fiction movies and television over the years!

Non-humanoid aliens are usually treated as ‘uncontrolled creatures’ and most often used as neutral monsters in scenarios. That said, creative players shouldn’t let this stop them. If you really want a crewmember that looks like a floating jellyfish or man-sized centipede, then there is nothing wrong with that. As-long-as you can make the figures distinct from one another, and make it clear to your opponent which figures represent your captain, first-mate, or specific soldier type, there shouldn’t be a problem.

Robots, on the other hand, are treated slightly different in the rules. Essentially, whenever you recruit a new soldier into your crew, you can simply declare it is a robot. This comes with a few specific strengths and weaknesses (such as not needing to breath!), and changes their interactions with some of the powers and gear available to crew. You can’t have a robot for a captain or first-mate, although you can have a cyborg who is mostly machine. So, you can include a robot or two in your crew without it changing the structure of your crew much. You could even have all your soldiers be robots, though this is probably only likely if your captain happens to be a robot expert…

Anyway, hope that gives you a bit more idea about the freedom you have when buying figures and building your crew!

For those wondering, the 'robot' above is a mech from the new Battletech game while the human is from Anvil Industries.