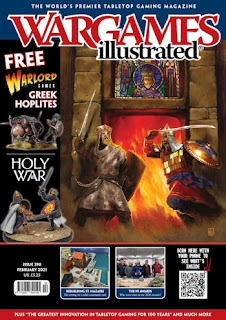 I’ve just received the new issue of Wargames Illustrated (398), which is always a treat. This issues also happens to include 'The Sunless River' a solo scenario I wrote for Ghost Archipelago, but which can also be used for Frostgrave! (I included conversion notes.)


As the title suggests, the scenario is mostly set on a river, with the crew in a few small boats. They have to make their way down an underground river that features several small islands with strange pylons… and there are also a lot of ‘river-skimmers’, basically giant spiders that can walk on water!

So, if you are looking for a little more solo Frostgrave or Ghost Archipelago action, you might want to check it out! (And they did a great photo shoot for the scenario as well!)

The issue also comes with a free sprue of Warlord Games Greek Hoplites. If you have no other use for them, they make pretty good Dricheans for Ghost Archipelago.

You can grab a copy from NorthStar or direct form Wargames Illustrated.